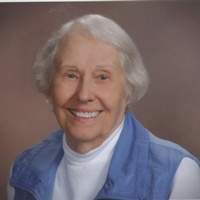 Ahtrell Rhea Blackburn Dalton peacefully left this earth on September 22, 2017 at her home in Country Home Estates in Commerce, Texas where she was a resident beginning in 2013. The youngest child of Koger Baxter and Zera Moore Blackburn, Ahtrell was born in Wolfe City, Texas on February 6, 1926. Upon seeing his new daughter for the first time, her father pronounced her a tincy thing. Thus, Ahtrell became â€œTincyâ€ to her family throughout her life. After graduation from Wolfe City High School, Ahtrell attended Draughonâ€™s Business College in Dallas where she met her husband, William Ray â€œDubâ€ Dalton, Jr. Married on September 28, 1945, Dub and Ahtrell made their home in Garland, Texas for the next forty years before retiring to Fairlie, Texas and building a home on her fatherâ€™s farm in 1985.

Following a long career as the office manager for Sabin-Robbins Paper Company in Dallas, Texas, Ahtrell achieved a long held desire to work as a care giver when she became a Licensed Vocational Nurse in 1969. She worked for the Garland hospital until relocating to Fairlie where she continued her nursing career at Hunt County Regional Hospital. While living in Fairlie, Ahtrell enjoyed gardening and participating in the Fairlie Ladies Club.

Ahtrell had a number of hobbies including reading, crossword puzzles, jigsaw puzzles, counted cross stitch needlework and embroidery. Most of all she and Dub loved to travel throughout the United States including a trip to the 1964 Worldâ€™s Fair in New York City and overseas to Cuba before the revolution. Active throughout her adult life in the Order of Eastern Star including several terms as Worthy Matron, Ahtrell and Dub were Rainbow Girls sponsors for a decade or more. After retirement, Ahtrell served on the board of the Methodist Childrenâ€™s Home in Waco, Texas.

She was preceded in death by her brother, Daniel Lester Blackburn, Sr. of Forest Park, Georgia; her brother-in-law and sister-in-law Bill and Doris Dalton Smith and her nephew, Thomas R. Walker of Allen, Texas. In addition to her family, Ahtrell is survived by many friends who enjoyed her quick wit, ready smile, and zest for life.

At the time of her death, Ahtrell was a member of the First United Methodist Church of Commerce, Texas; United Methodist Women; the Charles Croxall Chapter of the Daughters of the American Revolution, and Commerce Chapter 208 of the Order of Eastern Star.

A funeral service will be celebrated under the direction of the Reverend Doctor Gregory S. Neal at 10 A.M. on Monday, September 25, 2017 at the First United Methodist Church of Commerce, Texas with interment to follow at Mount Carmel Cemetery in Wolfe City, Texas. Pallbearers will be Ahtrellâ€™s nephews â€“ James L. Walker, Daniel R. Walker, James R. White, Michael Stokic, James Brandon Walker, and Benjamin T. Walker. The family will receive guests in the Family Ministry Center beginning at 9 A.M. Monday prior to the service. In lieu of flowers the family requests memorials be made to the First United Methodist Church of Commerce, Texas.

To order memorial trees or send flowers to the family in memory of Ahtrell Dalton, please visit our flower store.